Science, art and a sprinkling of fairy dust 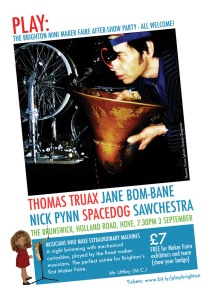 Robotic bells,  Clara 2.0, the ‘polite robot thereminist’ and Edgar Alan Crow: to anyone who knows her – which is an impressively vast and thoroughly deserved fanbase – the words Sarah Angliss automatically follow. Part science, part art, all performance, Angliss’s robotic and hypnotic acts tempt you down meandering paths towards unexpected magical discoveries. While this may seem like hyperbole, her biography speaks for itself:

Alongside my solo projects, I regularly collaborate with other engineers and artists. Recent collaborators include the National Physical Laboratory, Punchdrunk Theatre Company, psychologist Prof Richard Wiseman, dancer Caroline Radcliffe and sculptor and automatist Tim Hunkin among others.

I’ve won a number of awards, include NESTA Dreamtime funding and public engagement grants from the Wellcome Trust.  In 2007, my AV installation Repeat Repeat, in collaboration with performer Caroline Radcliffe, won a Quake Dance Festival Award. My collaborative performances in the Festival Fringe have twice been nominated as  ‘stand-out’ shows of the Brighton Festival.” 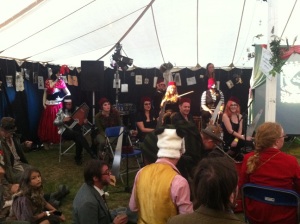 And now she’s arranging the aftershow party for Brighton’s first Maker Faire which takes place at The Brunswick on 3rd September. In addition to performing her unique and mindblowing work, Angliss has put together an incredible line-up of fellow artists including Thomas Truax, Jane Bom-Bane, Nick Pynn and FoT favourites, Sawchestra (pictured above) who ran two amazing events for us at Playgroup.

Book your tickets now – you won’t be disappointed.

“If it’s not fun, you’re not doing it right.”
Bob Basso (courtesy of TinyBuddha.com)

Yes sir, I can hula

At FoT, we love talented and quirky acts, particularly if there’s an element of magic to the performance. As far as I’m concerned, hula-hooping is magic. Yes, I know there’s a science to hula hooping but no matter how many lessons I have, such science eludes me and instead, I continue to prove that gravity does indeed exist, in the form of the hula hoop repeatedly thumping to the ground.

These wonderful performers are thus utterly magical to me. Enjoy.

And just to show we bring you the hottest new talent first, this amazing child prodigy. Yes, the get up is a little disturbing but just look at the pure joy in her smile…

Question everything even this

Skeptics in the Pub is a fantastic organisation that, as the name suggests, is a group for those who enjoy discussion and sharing beverages with others of a skeptical nature. It aims to promote and foster the use of reason and science to further lifekind, while drinking beer.

The lovely Tim, who runs Brighton Skeptics, came along to the Forest of Thoughts at Playgroup Festival, to stimulate debate based on a series of questions he’d devised that we lovingly calligraphed onto paper doilies. I suspect this may be the first time that Skeptics in the Pub has utilised doilies as a communication medium. Should you feel like a debate tonight, here are just a few of Tim’s questions:

If man evolved from monkeys, why are there still monkeys?
Science has been wrong many times before, how do we know it’s right now?
Why are people always criticising homeopathy if it’s only sugar pills? Surely it’s harmless?
How are the UK libel laws potentially damaging the public’s health?
Is ecstasy really as safe as riding a horse?
Is glass really a liquid?
If there’s no such thing as psychic powers, how do I sometimes know who’s on the phone?
Do I really have free will?
Isn’t the earth only warming up due to sunspot activity?
Why do clever people sometimes believe stupid things?

He offered the light of insight to people who stumbled into the forest blinded by preconceptions in a charming but ruthlessly skeptical way. And we loved him for it.

If you like the idea of stimulating your grey matter and engaging in some critical thinking, get down to The Caroline of Brunswick on  8th September to see Tabitha Innocent from  Sense About Science talk about the Ask for the Evidence campaign and some of the mythbusting and evidence hunting work Sense About Science has done.

Sense for Science exists to challenge many misleading claims about scientific and medical evidence. This autumn they are launching a public campaign, ‘Ask for Evidence’, to bring about wider, more lasting change. When people come across dubious scientific claims, they want someone to go to with their questions. The campaign will encourage everyone to take up claims they think are misleading, both by reporting dodgy science claims and by getting involved in tackling claims themselves, to help stop the spread of misinformation in public discussion.

Entry to Skeptics in the Pub (Brighton) costs a mere £2 to cover speaker expenses, and is on a first-come, first-served basis. If you can’t live with that level of uncertainty, advance tickets are available @ £2 + 5-p P&P from the venue’s website and include a voucher for £2 off any main meal in the pub on the day of the event.

And if you’re not Brighton-based, never fear. There are local Skeptics in the Pub groups across the UK. 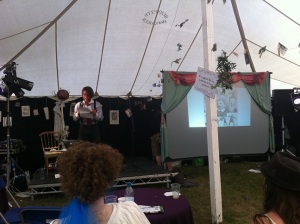 I challenge anyone to meet Rufus Moonshine and not fall a little bit in love with him. He combines gentle charm with a viciously sharp mind, and has a brain full of obscure and fascinating facts. Talking to Rufus is like wandering through the backroom of a museum that hasn’t been touched for years and is hiding endless wonderful treasures. He’s uploaded the text for the talk he did in the Forest of Thoughts entitled  Conan Doyle, Fan Fiction and the Severed Ear. Enjoy.

Spliff Richard won the Hammer and Tongue Poetry Slam at Forest of Thoughts. Tom Hume captured him on video. Go with the flow… 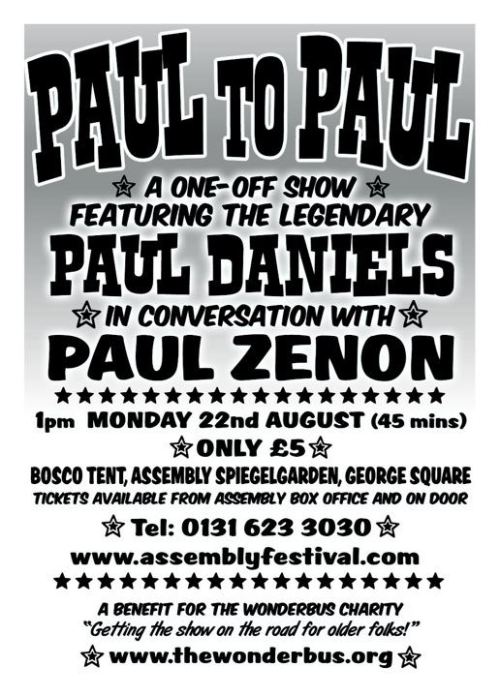 The wonderful Paul Zenon sprinkled his fairy dust over the Forest of Thoughts, amazing people with fantastic tricks. He’s now off in Edinburgh, and has used his magical powers to persuade Paul Daniels to do a chat show with him on Monday afternoon as a fundraiser for the Wonderbus (a wonderful charity that I strongly […]

Children of the revolution

Without Playgroup Festival, the Forest of Thoughts would have remained a thicket in my head. However, the lovely Playgroup team asked me to put together a cabaret tent and it spiralled from there. 140 performers and crew, 200 vintage photographs (thanks, mum), assorted bizarre props and many, many, many hours work later, the idea had turned from a bag of tiny acorns into, well, a Forest of Thoughts.

The entire Playgroup Festival was magical, with incredible decor (so good that I’ll be posting separately about the amazing team who created it) festival-goers dressed as woodland creatures, silly games, incredible walkabout performers, and delicious food and drink (again, more on the individuals behind that in a later post).

And that’s before we even get onto the utterly inspired musical line-up featuring the hottest new acts. This is not hyperbole. Having known the Playgroup team for a year, I’ve already seen several of their featured artists go on to become massively succesful. Quite how the team are so good at A&R, I don’t know – I used to work in the music industry and had an effortless knack for loving and supporting bands who went on to have a staggering lack of success. As such, I think anyone who’s a good A&R must have been dipped in fairy dust that gave them magical powers.

But, as they say, a picture is worth a thousand words. As such, the above video from Latest TV is worth about 1000,000 words. Watch it and judge the festival for yourself (it’s particularly lovely to see the amazing NGP Security get the praise they deserve. If you’re arranging an event and need security, NGP are by far the best I’ve ever worked with and I’ve heard rave reviews of them from many seasoned promoters.)

Playgroup Festival tickets are now on sale, and if you get in quick, you can take advantage of the Early Early Bird price of £65 (plus booking fee) – but buy now. I have it on good authority that the 100 tickets are moving at an extremely rapid pace so you’ll miss out if you don’t act now. 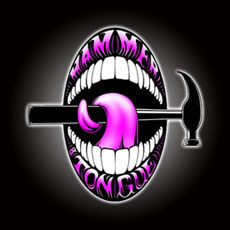 If you like words and have never encountered Hammer and Tongue then you haven’t been trying hard enough. This phenomenal organisation stormed it in the Forest of Thoughts on Friday 5th August, packing out the tent to such an extent that I couldn’t get in, and had to make do with hiding behind the tent and listening from afar.

Performance poets included Ray Antrobus, Spliff Richard, Ros Barber, Paul Stones, Robin Lawley,  Christian Watson, Chris Parkinson, Lucas Howard, Ash French, Rosy Carrick (who was also the wonderfully efficient organiser and charismatic host of the night) and featured artist, Adam Kammerling. The crowd clapped, whooped, cheered and generally lapped up every word that dripped from the hammering tongues on stage, finally deeming Spliff Richard to be the winner. If you think poetry is dull, check out some of the above links and you’ll see quite how exciting it can be.

You can see Hammer and Tongue on 1st September at Komedia – book your tickets now as it’s sure to be a sell-out show.